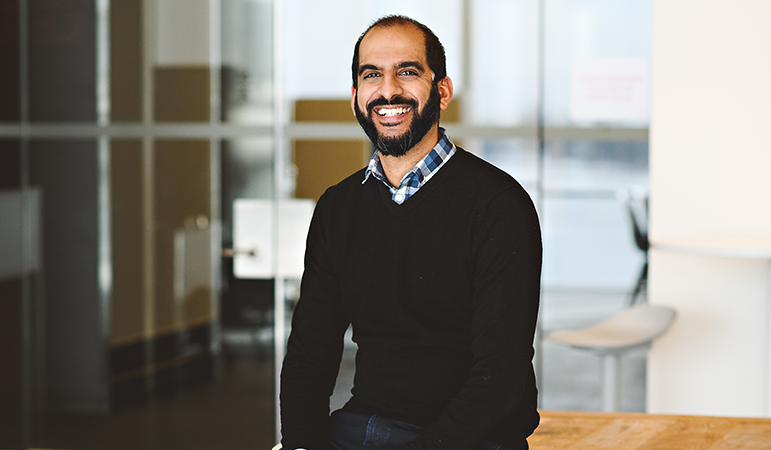 Transforming Business with CEO and Founder of Tulip Retail

More than 20 years ago, Ali Asaria and peers developed a rooftop garden concept for Shad’s Real-World Design Challenge. They pitched their idea to a panel of investors after a month of hard work and collaboration, and once the pitch was over, Ali received some unexpected advice.

Pulled aside by a Shad mentor, Ali was told the pitch was a hit and that he should consider incorporating business into a future career.

“I was like, ‘What are you talking about? That’s not me at all’…,” says Ali. “At that time, I hated the idea of being a business person. I thought I just wanted to be a scientist.”

But now, Ali has two successful businesses under his belt—Well.ca and Tulip Retail— that aren’t just products of his love for engineering and software, but are reminders of how entrepreneurship and business can expand any passion.

“I guess as I grew in my career, I kept noticing that no matter how good I was at my field, at engineering and computer software, there’s always this kind of limiting factor until I understood the business aspect of what I was building.”

After attending the University of Waterloo for Computer Engineering, Ali went on to work at BlackBerry, before founding Well.ca, an online health, beauty, and baby store.

Tulip helps retail businesses—including Indigo, Hudson’s Bay, and Kate Spade—transform their in-store experience. Tulip partners with companies like Apple and Salesforce to bring mobile and cloud-based solutions to help retail associates around the world better connect with their customers.

In 2017, Ali announced he would donate 80 per cent of his shares in the company into a charitable trust.

“I think one of the big things for Tulip is that what we really wanted to have as part of the company early on is could we marry the idea of having something that could be big and impactful while still mitigating the negative aspects of what big companies can do to the world. I don’t know if we figured it out, but it’s something that everyone at the company is really passionate about.”

Ali remembers an activity at Shad that sparked the idea of using business as a catalyst for change.

“Back when I was at Shad, we did this activity called the world game…,” says Ali. “The activities that we did at Shad, including that one, would sometimes question the way the economic model of the world and the way society works around business. And that’s always kind of stuck with me, this idea, and I always wanted to build things and software that had global impact and could really change the world.”

If you’re a Shad alumnus, we’d love to feature you in a story! Please contact alumni@shad.ca!