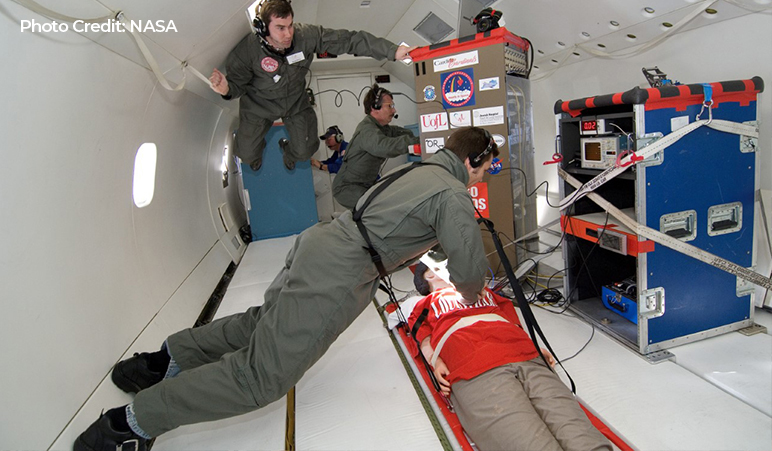 Collaborating with NASA to understand cardiovascular adaptation during spaceflight… Training astronauts on Canadarm 2… Assisting with payload prep for a protein crystal growth experiment for breast cancer treatment…These are just a few of the feats of this year’s Shad mentors who lent their space knowledge and real-world skills to Shad’s spaceflight competition this month.

“Spaceflight is kind of like the new or different way of looking at whatever your situation is,” says Dr. George Pantalos, a Professor of Cardiovascular and Thoracic Surgery and Biomedical Engineering at the University of Louisville.

“It gives you new insights, but then you can apply it to situations that you’re working with back on the ground,” says Dr. George Pantalos.

Shads had the opportunity to write their questions to mentors, and also participate in a live-session for more advice on meeting the requirements of their payload.

“When they presented their ideas and design, I was always looking for the reason why. Why are you doing this? You need to create a story to make me imagine what you’re thinking about,” says Mouhannad Nassouri, a Shad mentor and Safety and Mission Assurance Engineer at the Canadian Space Agency.

Shads like Jennah Stewart, Miranda Guo, and Jason Huang did just this, pitching their ideas to their assigned mentors to find solutions and new ways of thinking about their designs.

Jennah’s design team hopes to simulate a brain barrier function that’s difficult to replicate in a typical science experiment. When this brain barrier is compromised, it’s possible to suffer from strokes or even brain cancer.

“It’s great to be able to talk to educated, accomplished professionals, not just for our project, which was extremely beneficial, but also to see the job opportunities in the world, and be able to talk to people who have learned so much and have so much knowledge to share with us,” says Jennah.

Both Miranda Guo and Jason Huang’s teams received help from the mentors on what materials to select for their projects.

“There’s a lot of things that we didn’t initially consider, but when we were talking to the mentors, they really brought up a whole number of aspects that we should have definitely looked into,” says Miranda.

A total of 62 design teams were part of the spaceflight competition, and for many, it was the first time working with people they’ve never met.

“What I’ve seen from the teams is that they were very diverse from a human perspective. And I think that’s very nice because it sets in the idea really early that anyone can do science. Whatever your economic background, your visible minority background, your gender,” says Marie-Josée Potvin, a Shad mentor and Senior Systems Engineer at the Canadian Space Agency.

Only 10 student projects will move on to the next round of judging, where their designs will be assessed from a scientific and technical perspective. After another two rounds of judging, one deserving design team will have their payload flown into space.

But even though all the designs won’t end up in space (at least for now), learning from mentors and digging into complex STEM problems is an experience worth undertaking.

“Even if these students don’t end up pursuing a STEM career, having an awareness and knowledge of how science works impacts all levels of society,” says Marcia Fiamengo, a Shad mentor who worked on payloads under NASA’s Student Spaceflight Experiments Program. “The scientific method is a very strong decision-making process and if we can engage and make it exciting and encourage that thought development, it benefits everybody.”

A huge thank you to all of the incredible mentors who shared their time and knowledge as part of ShadOnline: