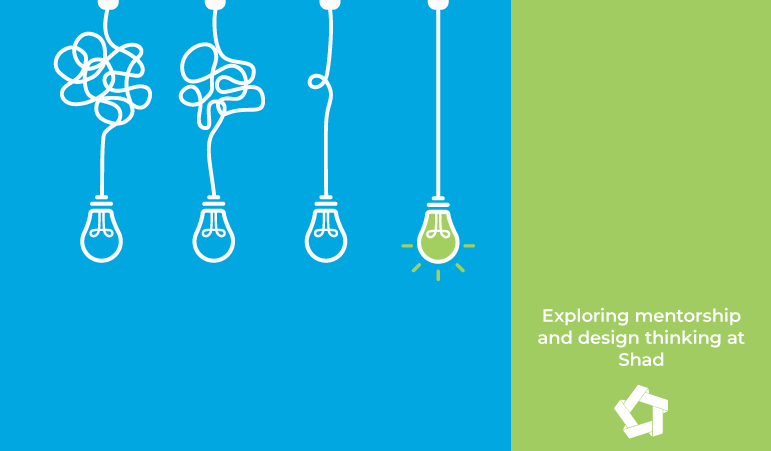 Design thinking. It’s an approach used by the minds behind some of the most successful companies in the world. It’s a framework used for innovative ideas that lead to big change and meaningful impact. It’s how Shads tackled this year’s real-world design challenge—and how they will continue taking on complex problems in the future as Canada’s next generation of changemakers.

Like the start of any design thinking process, Shads were introduced to the problem at-large, through this year’s design challenge question: How might we help Canadians treat fresh water with more respect?

“It was something broader than I thought it would be, but it was something that is applicable to what the world is going through right now. I think it was good to shed light on something that isn’t talked about enough,” says Shad2021 Chloe Wiebe from Winnipeg, Manitoba. “Now that I’ve learned about it, I’ve found myself way more conscious of the whole problem and thinking about that more. I think I found myself more open to other problems as well.”

Joined by a panel of water experts on the second day of the program, students asked questions and bolstered their understanding of fresh water from a variety of perspectives and disciplines.

From there, Shads met their fellow designers, joining teams of talented students from across Canada.

“We had a bunch of team building activities, like some challenges and personality tests to get that relationship going,” says Shad2021 Anindya Barua from Waterloo, Ontario.

Facilitators joined groups to foster these conversations, sparking ideas and healthy collaboration within teams from the start.

“Being put in a group with so many like-minded individuals and peers was really helpful for me to collaborate with people who are on the same page as me, wanting to be there, wanting to do it, and wanting to learn from this experience,” says Chloe.

In any design thinking process, understanding the problem and audience before diving into potential solutions is key. Teams explored various aspects of the problem, chose an audience to focus on, and conducted vigorous research to develop their own strong problem definitions.

“In every other situation where I’ve been told to solve a problem, it’s always focused on the solution and not about the problem itself and understanding every single piece that you want to fix and make an impact,” says Chloe. “I think that in understanding real-world problems, that’s definitely something I have missed out on in projects at school and in other problem-solving aspects of activities I was part of.”

Chloe’s team chose homeowners as their target audience and explored the feasibility of creating a rain barrel water filtration device. Upon finding out something similar already existed, they were surprisingly brought closer to their final solution.

“We had basically created something that was already on the market…,” says Chloe. “We weren’t really solving the problem in a new way. So, what we came to realize is that the solutions are out there, but no one knows about them.”

To bring these solutions to light, Chloe and her peers landed on developing a website that would provide information to help homeowners learn about solutions and alternative water sources in their area. Homeowners would be able to input their location and see short or long-term solutions to improve their freshwater usage. They would also be able to connect with other nearby homeowners within the app to help them solve their shared water woes.

Over 100 past Shad participants supported this year’s 2021 cohort, providing perspectives on how they interact with water on a daily basis. Many alumni also returned near the end of the program to provide feedback on the proposed solutions before teams made their final pitches.

Mentors from Kinaxis—a leading supply chain management company and long-time supporter of Shad—also joined students to provide their perspectives and advice on projects.

Mentors came from various departments within the company—anywhere from business applications and product verifications to machine learning and professional services.

For Shoraz Yusuf, a Kinaxis business analyst in IT and Business Solutions, mentoring at Shad was a way to pay it forward.

“Sometimes it’s also nice to see what the new generation is thinking…,” says Shoraz. “They are pretty smart to do some of the things they’re thinking and talking about at that age.”

Ankur Rathi, a Kinaxis advisory developer in Solutions and Business Applications, joined Shad Western, providing insight about supply chains and technology. He returned to the campus as a judge at the end of the program, seeing that many of the final pitches, videos, and prototypes were executed on a professional level.

“What I found from the first time when I met them was that there was a gradual improvement in the first round of discussions I had with them to what I saw during the presentations,” says Ankur. “In some cases, they had completely pivoted from whatever design they had initially… and came up with a new and much better idea.”

Anindya’s team had a similar trajectory to other teams, finding their solution much later in the design thinking process. From the start, they wanted to help Canadian homeowners take advantage of grey water, but it wasn’t until after hours of research and testing out ideas that they came to their final solution.

At first, they thought of designing a filter to make grey water from washing machines, faucets, or even showers potable.

“One of our interviewees mentioned repeatedly that perception is everything and there’s a huge yuck factor with grey water,” says Anindya. “Having people drinking it, interacting with it, they’re pretty hesitant even just using it for their lawns and other stuff.”

Learning this was no longer a viable solution for their audience, they investigated using filtered grey water for other purposes. After finding out that concrete is made with fresh water, they agreed that filtered grey water would be a much more sustainable option. They ran the idea past homeowners again, receiving strong approval that this is something they could get behind.

But instead of taking grey water from homeowners themselves, Anindya and team crafted a solution where wastewater would be taken directly from municipalities and then filtered by their organization.

“It’s a win-win, because for municipalities, they have less of a workload, they spend less resources on treating the wastewater and managing it because we take some of that burden for them for our solution.”

They would hope to partner with construction firms as well, using the grey water concrete to build new homes or other structures.

“The whole design process is something I am going to remember for a very long time…,” says Anindya. “It’s changed the way I look at problems. Instead of just aiming for the solution, you’ve got to work your way up. You have to have a good foundation. That approach is something I’ll probably try and implement in a lot of aspects of my life.”