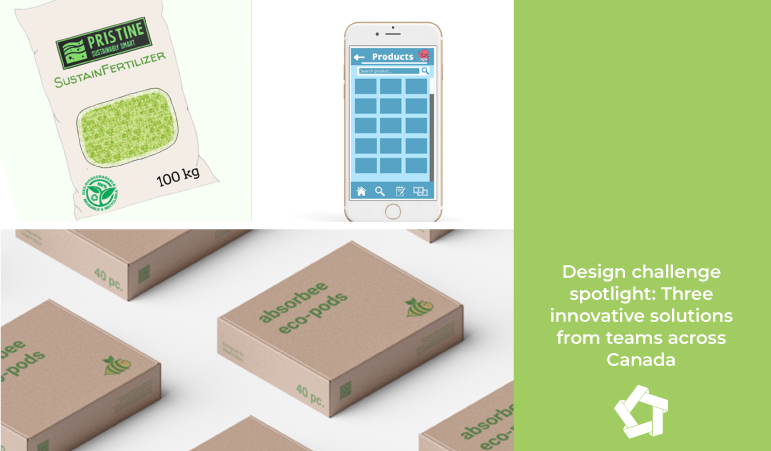 During Shad2021, students from across Canada collaborated in teams to problem solve and help Canadians treat fresh water with respect. Over a jam-packed month of STEAM lectures and workshops, teams worked tirelessly to come up with ideas, turning them into viable solutions they’re proud to call their own.

Three teams from three different campuses shared their projects, ideas, and solutions with us. Each team won awards at their respective campuses, presenting their unique solutions and compelling pitches that addressed various aspects of freshwater management and pollution in Canada. An eco-friendly fertilizer, an educational app, and a liquid waste absorbing tablet — these are solutions you don’t want to miss.

Eutrophication. It’s a process Avora Maitland-Collins and her teammates at Shad knew little to nothing about before the program. But after hours of research, brainstorming, and collaboration, not only did they learn what it was, but they developed a solution that tackles the issue right at the core.

“When we look at solutions, we need all solutions,” says Avora, who’s from Richmond, British Columbia. “We need solutions that tackle something at a base level, but we wanted to go to the root problem which was agriculture.”

SustainFertilizer by Pristine is an alternative to fertilizers that have high amounts of nitrogen and phosphorus, which are known to pollute fresh water sources.

“When it rains and when there’s flooding, these fertilizers run off into the surrounding environment. When this happens, say they enter a lake, say Lake Winnipeg, the fertilizers act the exact same way they work on land in water,” says Avora. “They’ll feed the algae.”

This creates harmful mats and algae blooms on the surface of the water which prevent sunlight from reaching other aquatic plants, halting the photosynthesis process.

“When we get these algae blooms, oxygen levels in water become depleted…,” says Avora. “This whole process is called eutrophication, basically when nutrient levels in an environment become really, really concentrated.”

But this algae growth doesn’t only contaminate fresh water or harm aquatic life.

Their fertilizer solution is an eco-friendly alternative for wheat, soybean, and canola crops.

“It releases the nutrient nitrogen at a slower rate that is controlled. So it’s not going to leech off in the surrounding bodies of water as quickly.”

While developing their idea, Avora and team included a website into their design, meant for farmers to learn more about their product and different sustainable techniques to reduce run-off.

“Watching one of the first keynote panels, they really emphasized education which I think was really great. Because we can sell these products, but if we don’t educate them on why they’re important or other options and how you can use different techniques in conjunction with a product, we won’t get anywhere.”

The team received great feedback from the judges after pitching their product—one judge giving them advice on the patenting process.

“I thought that it was cool that they were bringing it to that level already…,” says Avora. “It was amazing just watching the judges and everyone pay their full attention to us and being so interested and asking amazing questions.”

After presenting, Avora says it was gratifying to see all the work they accomplished as a team during the month.

“Working in this setting with eight amazing people, I think everyone was able to bring their ideas to the table. And maybe alone it would be hard to execute them. But together we were able to do what we could have never dreamt of. When you work on a team and everyone brings a different skillset to the table, you can really do amazing things.”

Heading into the real-world design challenge, Rosie Liu wasn’t sure what to expect.

“I had heard about the design project because it’s a well-known part of Shad. But it was also one of the factors that kind of scared me when I was applying to Shad,” says Rosie, who’s from Richmond, British Columbia. “I didn’t know if I would be all that innovative or be able to come up with a solution. I was also scared of bonding with my team because I know online can be a bit harder to make connections.”

But by diving right in, not only was Rosie able to make those bonds with her teammates, but they also worked together to develop Water you Doing?, an innovative digital solution to educate Canadian homeowners on how they can be more eco-conscious.

“It’s an app that scans barcodes of commonly used household products, like detergent, shampoo or body wash that always go down the drain,” says Rosie. “By scanning the barcode, the app analyses the ingredients of the product.”

Many common household products contain harmful ingredients that contaminate water, making it dangerous for aquatic life, drinking or even swimming, says Rosie. After scanning the barcode, the app would suggest alternative, more eco-friendly products for homeowners to use.

The app would have a blog and article section, a hub full of posts about relevant topics like how to read a water bill properly or lists of what household products to avoid using altogether.

Homeowners would also be able to input their location in the app to reveal proper pharmaceutical disposal centres, so these products don’t end up in the drain too.

“Because the program was online, everyone was in a mindset of doing something digital,” says Rosie.

They came up with one element of their solution after listening to homeowners and asking them questions about their daily interactions with water.

In the interviews, we gathered that some people weren’t as educated about the crisis as they wanted to be. So that’s where the idea for the blogs and articles on our app came from.”

Knowing they wanted to incorporate an interactive element, the team built on each other’s ideas and settled on the scanning function of the app.

“We actually did a lot of research, which I wasn’t expecting. We all read about different sources of water pollution and things like that so we could narrow down our topic… and make it something we could actually tackle. I definitely learned a lot more about how we as everyday Canadian citizens contribute to the water crisis and not just big things like oil spills or disasters you might hear in the news.”

On top of research, Rosie shared how talented her team members were, everyone stepping up to share their unique skillsets, like logo design, video editing, or script writing.

“Throughout the month, our team became a lot closer, and I think our team dynamic was actually what helped us a lot in creating such a great solution that we’re all really proud of.”

After interviewing homeowners, Jacqueline Fung and her team knew the problem they wanted to solve. They just didn’t know how to solve it… yet.

During the interviews “is when we got to hear about how they were just pouring stuff down the drain,” says Jacqueline, who’s from Toronto, Ontario. “Someone said they were flushing tomato sauce down the toilet… We were like, ‘There’s no way this could be good.'”

But many brainstorming sessions, research articles, and prototype demos later, their solution Absorbee Eco-Pods came to the surface.

They are eco-friendly compostable pods that absorb and deodorize liquid food waste.

“We were also kind of inspired by Tide Pods, and those Cascade Pods that you can put in your dishwasher as we were coming up with the idea.”

During the challenge, they learned Canadian households waste up to 4,000 L of water putting food waste down the drain. They also learned about fatbergs—concentrations of liquid food waste that wreak havoc in pipes and sewers—and how it can cost upwards of $18 million to clean up a single sewer backup.

During the month, their Program Directors led them through creative and critical time, providing an opportunity to think big without restriction while also narrowing down their ideas.

“That’s when we listed out at least 60 different solutions,” says Jacqueline.

During critical time, they would go back to these ideas, sifting through them one by one and listing out any pros or cons next to each.

Next the team had to figure out how the pod would effectively absorb liquid.

Jacqueline remembered an experiment she conducted during a science camp where she cut a diaper, finding a powder inside that absorbed water and turned into gel.

In addition to their prototype, the team also created a website with their packaging design, logo, and bee mascot on display.

“My team, we were so lucky, we had super talented people. Someone did a drawing of the bee on paper and then another one of my team members took a picture of the bee and then did a digital sketch of it.”

They are still working on their solution weeks after the program, hoping to send it off to competitions and iterate along the way

If you’re looking to explore more solutions like these, check out our Shad2021 project gallery with over 50 projects from teams across Canada. And check out the ShadStory all about the process behind the real-world design challenge at Shad.