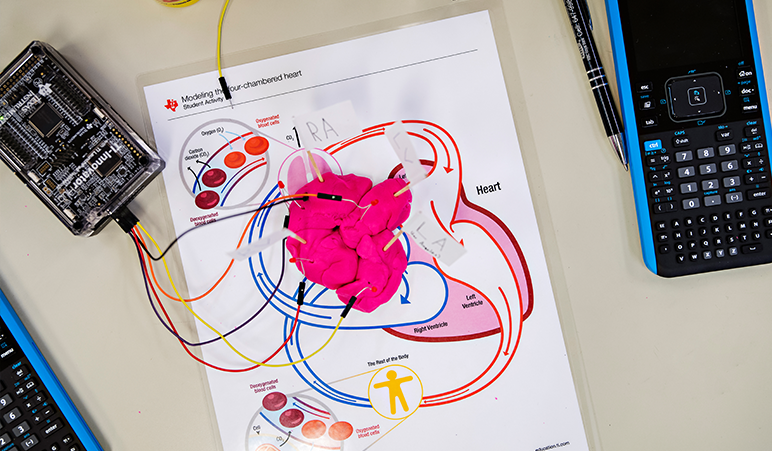 At Shad, hundreds of students are experiencing a crash course in coding—but instead of watching tutorials or flipping through textbook pages, they’re recreating traffic light signals, using robotic vehicles to draw, and even performing heart attack simulations.

At each workshop, students work with TI equipment that’s built for the classroom. Whether they are using graphing calculators, or TI-Innovator Hubs—which produce light and sounds when paired with codes—Shads are gaining hands-on, STEAM experience.

“Coding is becoming a 21st century learning skill more than it was in the past,” says Darryl Marchand, Education Technology Consultant for Texas Instruments Canada.

Coding not only teaches students how to problem solve and think creatively, but it’s a skillset that is high-in-demand, especially as more and more careers are relying on AI and technology.

“This workshop gives them an opportunity to apply real-life skills in math and science to technology and engineering activities,” says Darryl.

To start the workshop, Shads are given a quick introduction to coding—but many are already familiar. Nearly half of the students at a Shad Ryerson session had used graphing calculators before. But this exercise was not something they could imagine doing in their high school math class.

“I’ve done a computer science course that incorporated a little bit of Python and Java, but I have never worked with electrical circuits,” says Inssia Ahmed, Edmonton, AB, Shad 2019. “I have never physically seen the code work like this.”

During part of the workshop, they use modelling clay to make a heart, and put four LED lights and wires into each of its chambers. Then they run a code to flash each LED light twenty times to simulate blood flow.

They run the code a second time—but the lights suddenly go out and they must use the other ends of the wire as a defibrillator to bring the heart back to life.

“It was really cool seeing the heart and the model of how it would actually work,” adds Inssia.

Near the end of the workshop, Shads draw shapes on large pieces of chart paper with programmable rovers—and at the Ryerson sessions, Shads went above and beyond, drawing unique shapes and trying to spell out “Shad” as a large group. At Waterloo, Shads created images of the infamous Waterloo goose and the newly launched Shad logo.

“I really enjoyed working with other Shads,” says Vanessa Tan, Newmarket, ON, Shad 2019. “I can see other people’s strengths and weaknesses and see how we can work with each other to achieve a goal.”

As a former math teacher, Darryl says he enjoys seeing students get so excited about learning.

“We’ve always had positive feedback from Shads. You can see how engaged they are.”