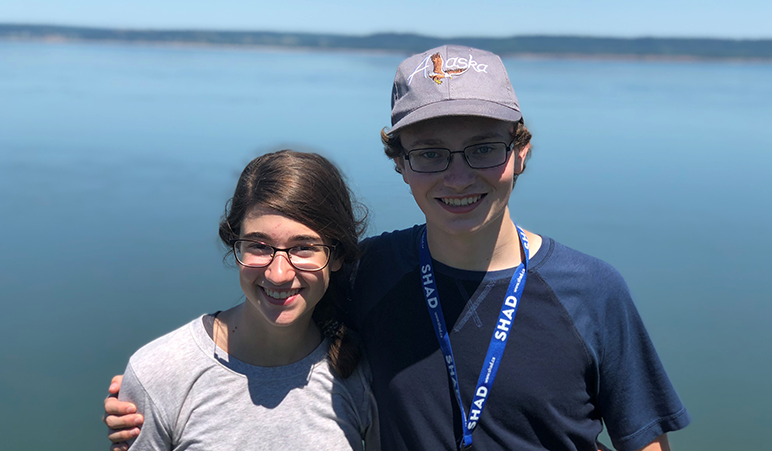 Before Shad, Grade 12 students Calum Bird and Sophia Fraser never considered going to a university on the East Coast. Calum was set on attending a computer science program in Ontario, and Sophia was looking at schools near family in British Columbia and Alberta.

But after they spent 27 days at Mount Allison University, they decided that the maritime campus was the place for them, liking the small class sizes and feel of the surrounding town.

“I was a little nervous to be venturing to the other side of the country but felt that dissipate when I found out that I would be there with the friends I had found so much in common with at Shad,” says Sophia Fraser, who will take biochemistry in the fall.

Mount Allison is nearly 4,500 kilometres away from her hometown of High River, Alta. Calum has even further to travel, coming from Summerland, B.C. which is more than 5,000 kilometres away.

“Having spent a month at Mount Allison will be sure to help with the transition,” says Calum.

They are excited to see the professors they met last July and to reconnect with Shads on campus, like Laura Paul and Jordan Takkiruq, who are also attending the university next year.

“Words do not justify the level of excitement I am constantly bombarded with in anticipation of seeing fellow Shads once more,” says Calum. “It will be incredible to see a few of them again, and I can’t wait to spend the next chapter of my life with them at Mount Allison.”

Calum remembers everyone sharing their plans for postsecondary school at the beginning of the program.

But over time, Calum says it was unanimous that at least half of his peers either wanted to go there or would at least consider it.

Erin Penney, Program Director and lab instructor at Mount Allison, says she is thrilled that Shads from last year are returning to campus.

“The university really is incredibly supportive of the Shad program. We have current students and faculty involved in some of our curriculum. This helps to highlight some of the amazing opportunities that our institution has to offer,” says Erin. “Shad exposes students to paths and opportunities that they may not have known otherwise.”