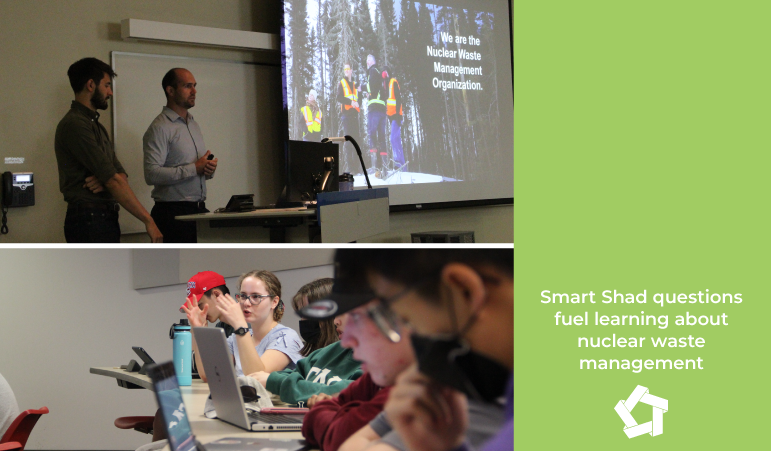 Before anyone could jump in and say what everyone in the room may have been thinking, presenters from Canada’s Nuclear Waste Management Organization (NWMO) just put it out there: “No, real nuclear waste is not glowing green sludge like in The Simpsons.”

They followed up with a picture to show that in fact, nuclear waste is not a goo at all but little metal pellets, and admitted that addressing myths and misconceptions is a regular task for them. After all, while the NWMO’s main responsibility is to design and implement a long-term storage plan for Canada’s used nuclear fuel, public education is a regular part of their work as well. For Shad, they are a long-term partner helping participants to learn about a significant energy source (nuclear currently powers 60 percent of Ontario’s electricity) and its challenges.

In the first part of their presentation, geologist Warwick Watt and transportation specialist Gabriel R shared the details of the plan in progress. In 2002, the federal government passed the Nuclear Fuel Waste Act that required nuclear companies to devise and fund a plan to deal with their waste, and the arms-length NMWO was created to operate at arms length and determine the solution. Since the current solution for managing used nuclear fuel (those metal pellets) is storing it above-ground in concrete pools at nuclear plants like Darlington (monitored by the International Atomic Energy Agency video cameras) and those pools have a lifespan of about 40 years, a longer-solution plan is essential.

But so is doing it right. For ten years, the NWMO has been researching how to store the used fuel, transport it, and protect it. They’re consulting with countries like Finland and Sweden, who are further ahead on their nuclear waste management pathway.

They’re also seeking advice from Indigenous advisors, who have done everything from walking the lands to advising on local vegetation.

NWMO has committed to working alongside communities being considered as sites for the storage facilities, and walking away from plans that are not locally approved.

At the moment, two nuclear storage sites are being considered in Ontario: in Ignace, near North Bay, and in South Bruce, just south of the town of Kincardine. The plan is to build a storage space out of rock, 500 metres underground. These two areas are attractive because they are situated in very solid and stable parts of the Canadian Shield that have no earthquake activity. Once the storage space is created, the nuclear fuel would be transported and stored and monitored there for 100 years before the facility is decommissioned. Five layers of protection, from the pellet structure to the containers that hold them to the rock itself, are put in place. When a site is chosen, construction will begin in 2033 with the site to be operational by 2043.

Having laid out the problem, the NWMO presenters posed a very open question to the Shad participants: “What would be your concerns if someone was going to build this kind of repository in your community?” Besides wanting to provide answers, the presenters also noted their own interest in knowing the kinds of questions that young people would ask. Shad students did not disappoint. Questions ranged from the logistics of waste transportation, to the effects on flora and fauna, to ensuring lack of bias from the nuclear industry. Shad participants also asked about the learning from past disasters such as Chernobyl and Fukushima, how the plan could be mitigated if future technological developments led to better waste management solutions, and how future civilizations would know about the facility’s existence if the world were destroyed or went into an ice age.

For Nathan Wong from Waterloo, Ontario, the whole topic was very timely. “I had a big discussion with my dad about nuclear power a few weeks ago, and nuclear storage came up, so a funny coincidence that now I know all about it,” he says. He added that he was impressed to learn about how much consultation the NWMO did was doing with Indigenous peoples. “It’s good that there are organizations out there that will work with Indigenous people and respect the autonomous authority they have over their land.”

Adam McAlpine from Burlington was excited about the NWMO’s prediction that the project development would require over 600 workers during the construction phase. “As someone who wants to be a mechanical engineer when I’m older, I was surprised and intrigued by the job opportunity. I thought it was already under construction, but now that I know it’s 2033, I have time to go to school, get a degree and look into the job market,” says McAlpine, whose father previously worked at the Pickering power plant.

Adam was equally impressed with the Indigenous involvement, and also by the depth of the research that the NWMO is putting into every aspect of its work. “The fact that the rocks need to be chosen so future humans will never come in contact with it [presenters mentioned avoiding mineral rich territory where explorers would be tempted to excavate] and the pellet containers are made to withstand an 8-magnitude earthquake, it showcased how much preparation they were putting into something that would last for future generations.”