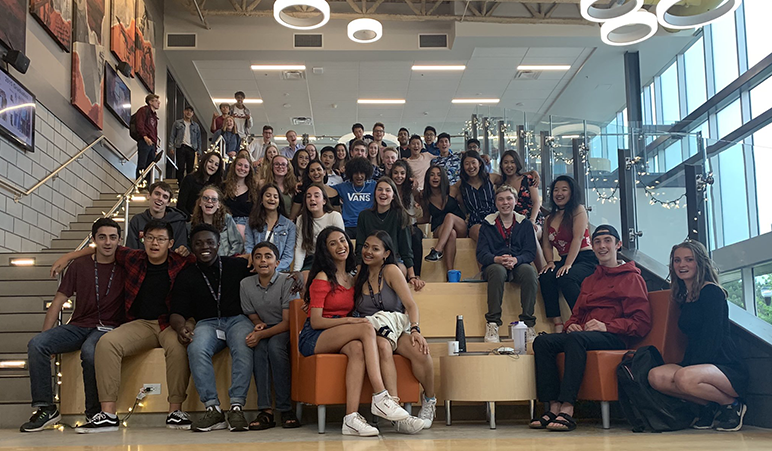 Nineteen days have gone by and every moment that passes makes this experience less and less believable. It’s impossible to imagine that such a vibrant and inclusive environment could be achieved. UPEI has provided us with a loving home away from home which we will never forget. With only 47 Shads, we have one of the smaller communities. This has enabled us to become a close-knit family. From beatboxers to varsity fencers to pastry chefs and talented musicians, we have each learned very unique lessons from one another. It’s astounding how such a diverse group can have so many similarities that tie us together.

Contrary to the stereotypical image of a lecture that pops into our heads when we think of lectures — composed of large rooms with the occasional student dozed off — Shad is able to provide stimulating lectures by harnessing the diverse interests of its participants. Here at the University of Prince Edward Island, Shads are exposed to a variety of different fields that fall under the STEAM umbrella. Take the lecture on bio-printing, delivered by Dr. Ali Ahmadi for example. The lecture explored the prospect of tissue engineering, a live demo was provided using polymers naturally found on PEI, such as chitin/chitosan from lobster shells and starch from potatoes! Other fascinating lectures included: “Counterintuitive Mathematics”, a talk on social epidemiology, and workshops like “University Preparation 101” and “Beginner’s Python”. Not only do the Shads learn about the intrinsic nature of these fields and how they interrelate, but many lectures are also tailored toward the Shad Project. Regardless of one’s interests, there are always an array of lectures and workshops throughout the day that keep us on our toes and eager for the learning that lies ahead.

In contrast to quiet classroom sessions and long lectures, recreational time in the afternoon is, for many people, the most exciting part of the day. Rec director Jenn is always thinking of creative games to play and she never fails to brighten our days. Jenn eased us into Shad with icebreaker games in the first week. These games were a catalyst for making bonds and sparking lifelong friendships. The second week we were split into designated rec groups. The first task was to come up with a name and paint a flag representing the team. The red Fiery Lobster team blew the others out of the water. Our rec activities were not confined to the physical limits of UPEI. During the camping trip there were many competitions, forcing us to be resourceful and creative. The sandcastle building contest was an opportunity for the UPEI Shads to hone their inner child and sculptor. Back on campus, the teams battled it out in a heated game of Capture the Flag. The game was filled with obvious puppy-guarding and more than suspicious hiding spots. An interesting twist to rec was when we had a UFit session with Gordon. UFit is similar to Zumba, but more fun. Gordon cleverly incorporated his motivational speaking background, leaving us emotionally and physically fulfilled once it was over. The culminating point of rec was the Shad Olympics. If there’s one thing I hope we all take away from my four weeks here, it’s that you are supposed to actually JUMP in a potato sack race. Walking through a ripped bag held up around your waist like a brown hula skirt does NOT count. After all of the events, the points were tallied and at no surprise to anyone, the superior Fiery Lobsters came out on top. At the end of the day, all that really matters is that everyone has fun and agrees that rec time with Jenn is often the highlight of the day.

Camping was an obvious highlight of everyone’s Shad UPEI experience. Each of us saw a different and unique side of each other and were able to connect with each other in a different setting. Being out in nature helped to refresh our minds and the change of pace let us relax and reset for the upcoming fun, but busy weeks. The activities we took part in were also very interesting, especially learning about professional sandcastle building. I think we would all agree that the red rock beaches on PEI and the breathtaking sights we saw were unforgettable and made our time spent at Stanhope so remarkable.

Saturday July 13th was an eventful day for us. Not only was it our first chance to venture off campus during free-time, it was an opportunity to explore downtown Charlottetown. The day started with free-time. Excited, the Shads spent the morning bonding in the common rooms, playing games outside, utilizing UPEI’s gym facilities, and visiting Charlottetown’s farmers’ market. After lunch, the Shads headed downtown to explore for the afternoon. Many of the Shads tried their first Cows Ice Cream, a unanimous must have treat while on the island. As the day was wrapping up, we were happily surprised with the news that we would be seeing the play Anne of Green Gables. The musical is a classic, based off a novel set in Prince Edward Island in the late 1800s and is a prominent part of PEI’s culture. We laughed and cried alongside Anne (the play’s protagonist), learning more about the history and heritage of the province. During the walk back to campus we chatted about the events of the day, sang some of the musical’s songs and reflected on the program thus far. Not only was the exploration of downtown a memorable day, but the immersion into island culture taught the Shads lessons far beyond what could have been learned in a classroom.

One of the most unique parts of Shad is the diversity, pluralism, and multiculturalism that it fosters bringing together high school students from across Canada. Throughout the program, Shads develop their own personal sense of Canadian pride and identity through the many stories, perspectives and experiences of other Shad participants. It was an unforgettable experience looking around and seeing the beaming smiles on everyone’s faces. Our close proximity to the Atlantic Ocean has also created awesome opportunities for very unique lectures like oceanic medicine. I know that we will never forget the long walks along the beach, surrounded by the most amazing people. I think I can say on behalf of all my fellow Shads that this red dirt island will forever be home to some of our most impactful moments and be responsible for some influential friendships!