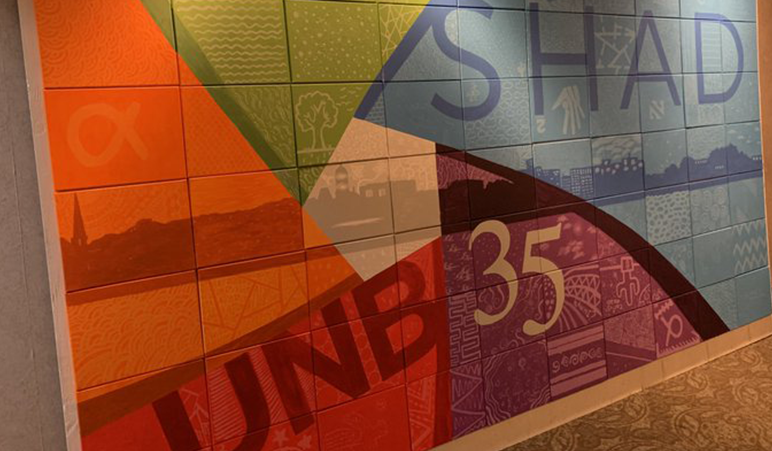 On July 9th, Shad students at the University of New Brunswick were busy as usual and having a blast! Over a week at UNB has passed, but the surprises and fun never end. Before the 80 Shad UNB students split up into smaller groups for the morning, they attended a lecture by Dr. David Scott, an Associate Professor of Sport Psychology in the Faculty of Kinesiology at UNB and a consultant for several NHL teams. The lecture was titled “Tips on how to stay on the road to success” and was well received amongst the Shad students. For the rest of the morning, the high school students from all over Canada were split up into groups to pursue different activities all over campus.

Half of the Shads went to one of the university’s many labs and were given tools for constructing robots. In groups of four, the Shads were able to leverage their diversity and creative problem-solving skills to tackle both the mechanical and software challenges that arose. They are looking forward to competing against one another later in the week to test their robots on a course. The other group of 40 went to the computer lab to try their hand at 3D modelling with the possibility of getting their designs printed. Though the task seemed relatively simple and straightforward, the possibilities were endless.

Some Shads attempted simpler objects like key chains, while others aided director Ian Fogarty, with his endeavours with the Kakuma Project. They helped the incredible project by designing a case for a portable solar panel charger intended to be used by several African refugees. Though the two hours appeared to be plenty of time, it was soon time for a scrumptious lunch.

The second group of Shads began their journey in robotics. After a quick introduction to the realm of engineering and coding by Electrical Engineering professor Troy Lavigne, the students were separated into groups of four. For some Shad students, building robots was their second nature, but others had the opportunity to experience it for the first time. With the support from various university students and detailed instructions, the Shads began to build their masterpieces. By using their problem solving and communication skills, they were able to overcome many obstacles in their robots’ design and coding. After multiple hours of tinkering on their robots they developed a strong appetite and headed for lunch.

After reconvening to enjoy lunch as a group, everyone transitioned to afternoon activity rotations. Three groups were made to cycle through the following activities: designing airplanes, constructing speakers, and geodesy and geomatic engineering. Firstly, hot glue, exacto knives, and foam board was distributed to small teams of Shads as they created their airplanes. Many innovative designs were produced and later launched in an auditorium to see the feasibility of the designs. Afterwards, the Shads relocated to another area on campus to learn about the parts of a speaker and how they operated by constructing their own. They got creative by using a variety of materials ranging from plates, wires, and magnets. After learning about the science behind speakers, the Shads were excited to test their own and hear music being played from the base of their plates. Lastly, they learned about geomatic engineering which encompassed geodesy – the study of the size and shape of the Earth. This engineering is thereby applied in fields including, but not limited to: land surveyors, hydrographers, remote sensing, and geographic information systems. Additionally, in tandem with this lecture, the Shads got practical experience using GPS systems to navigate the campus to locate particular coordinates.

After the numerous activities, the Shads were given some free time (also known as Shad time), and spent their hour exploring the UNB campus, taking a nap, or hanging out with their friends. Following supper, Shads met together from 6:00PM to 8:00PM with their Entrepreneurship Project (EP) groups. With the combined goal of reducing waste in Canada, Shads had been placed in specific topic groups on the subject of waste ranging from consumer awareness, to plastics, to biomedical waste. With endless enthusiasm, groups have been working efficiently and have been putting their creative and innovative minds to work. It is only the beginning of the EP process, but it is easily foreseeable that these Shad EP’s are going to be fantastic.

For the week of July 8-12th, the Shad UNB campus is having their “late night” week of festivities. Every night during this week at the Tilley Auditorium, students have the opportunity to show off a talent or skill based on the theme of the night. The night’s theme on Tuesday was SPEAK. Students were encouraged to inspire others and take risks by showcasing a poem, a speech, a song, or even a comedy routine. The night was filled with fantastic acts and performances; it was definitely a great way to end a fun and busy day!