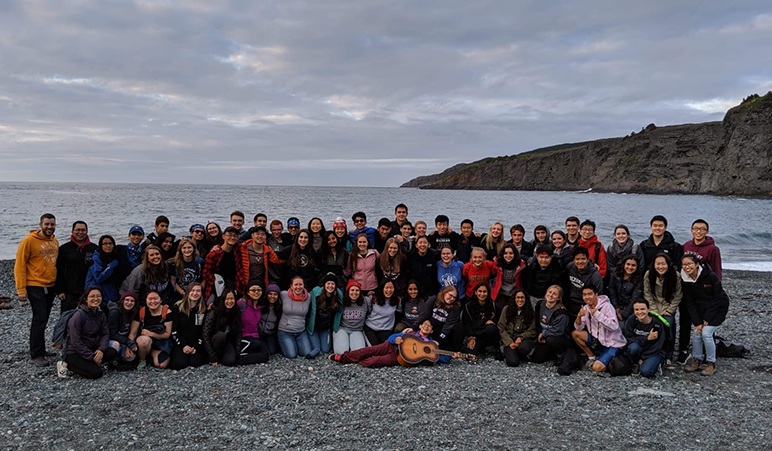 Every adventure has a beginning. On Sunday June 30th, 56 Shads flew from all across Canada to attend Shad MUN 2019 – kicking off what is certain to be the best MUNth for everyone!

With the weather looking cloudy but no rain in sight, the third day of Shad included a photo scavenger hunt. Seven hopeful houses bolted from the starting line to get to all the destinations the fastest. As routes were planned and pictures were taken, the Shads got closer and closer to completing the challenge. However, everyone was soon taught a lesson on the erratic nature of Newfoundland weather as the houses scrambled to stay dry while continuing to capture pictures with great team spirit. After a very wet hour, all seven houses completed the scavenger hunt, getting a nice taste of Newfoundland weather along the way. In the end, the purple house emerged victorious as the Masters of Memorial University.

On Friday, the Shads were surprised with a field trip to Middle Cove beach. While some Shads braved the freezing waters of the Atlantic Ocean, others stayed dry and appreciated the beautiful scenery along the beach. As the night grew colder and darker, everyone huddled together by the bonfire and enjoyed s’mores as well as each other’s company. Not surprisingly, many Shads brought their instruments, including a Chinese flute, violin, clarinet, guitar, and a trio of ukuleles. As everyone played and sang together, what was once a group of 56 nervous high school students became a tight-knit Shad family.

Over the first weekend, the Shads took a ferry to Bell Island and even spotted an iceberg along the way! The visit included a wonderful tour of the historical Bell Island Mine that reached three miles deep and even extended underneath the Atlantic Ocean. This engaging tour placed the Shads into the shoes (and hats) of a miner by leading them down into the dark and cold mine tunnel. After learning about the history of the mine, Shads left Bell Island to visit Signal Hill, the location where Marconi received the world’s first transatlantic wireless signal in 1901. This action-packed day was not yet completed as the Shads also explored the Johnson GEO CENTRE and The Rooms Museum.

On the following day, the Shads visited the Colony of Avalon, known as the best preserved early English colonial site in North America. They experienced a guided tour to learn about the history of the colony and the people who lived there. Additionally, the archaeology lab displayed some of the 2 million artifacts discovered to date and the Shads received the chance to act as an archaeologist and clean recently discovered artifacts. Afterwards, Shads went on a beautiful hike to the Ferryland Lighthouse and were treated to majestic sights of the Atlantic Ocean, including hundreds of capelin fish rolling onto the beaches. The pictures definitely do not do justice of the beauty that Newfoundland contains! After an exciting week of learning and breathtaking views, the Shads are all excited for what is next to come.