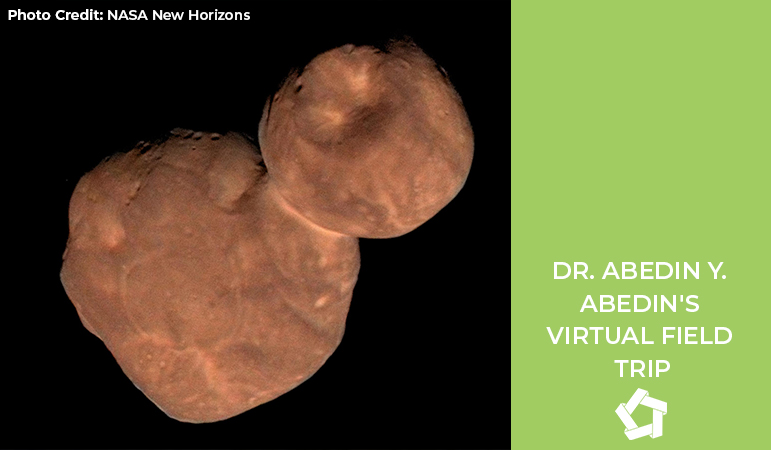 Our journey to Arrokoth

As a National Research Council of Canada Postdoctoral Fellow, Dr. Abedin Y. Abedin is conducting collision research based on a historic flyby with an object in the outer Solar System.

In 2019, NASA’s New Horizons spacecraft flew by Arrokoth, an icy object in the Kuiper Belt, providing astronomers with images of a new Solar System body and insight about the formation of the Solar System.

“When New Horizons approached the object, when we started seeing surface features, that was so exciting,” says Abedin. “That was the farthest encounter in the Solar System. We have never had such a close encounter, at such a great distance from the Sun.”

Before the flyby, astronomers only knew Arrokoth as a tiny speckle, even through the world’s largest telescopes.

In his research, Abedin reviews these stunning images of Arrokoth, counting its craters to calculate how often objects collided with the object and how much interplanetary dust was created in these collisions.

“We expected many more craters. But New Horizons observed very few of them, which means these objects did not collide as often as we initially thought. This indicates that the migration occurred kind of smoothly, not very violently over time,” says Abedin.

Originally, New Horizons was only meant to explore Pluto, and in 2015, the spacecraft flew by and captured its features in stunning photographs and detail for the first time.

But astronomers were hoping another object could be explored somewhere along the mission. In 2014, Abedin says that the Canadian Astronomy Data Centre actually helped identify Arrokoth along New Horizons’ slated trajectory and navigate the spacecraft by providing detailed star charts.

“That’s how they decided to extend the New Horizons mission,” says Abedin.

Shad Keeley Isinghood remembers seeing images of Arrokoth on the news, but didn’t know what the object was, until this session.