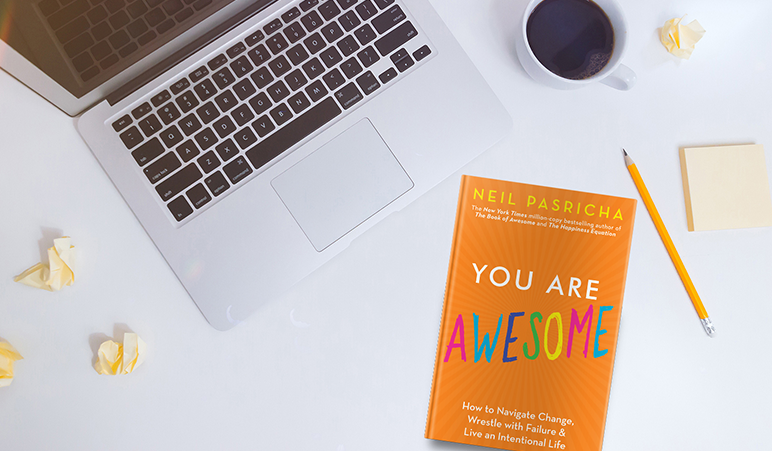 Want to be a better friend? A better decision maker? A better writer to master that Shad application?

“Three years ago, I read about five books a year,” says Neil. “That’s about average for a Canadian.”

Now he’s reading over 100. (And sharing them through his monthly reading club.)

“Books are actually still the greatest form of compressed wisdom and knowledge we have in the world.”

But of course, Neil isn’t just an avid reader. He’s a podcaster, entrepreneur, public speaker and a New York Times, million-copy bestselling author. His titles include The Book of Awesome, The Happiness Equation, and his upcoming book, You Are Awesome: How to Navigate Change, Wrestle with Failure, and Live an Intentional Life.

But before all of this, he had to first see awesomeness, happiness, and change within himself.

“I suffered from extremely low confidence throughout my entire life. I was Indian. I was small. I had big glasses,” says Neil. “I didn’t know anyone else that was Indian in my childhood. I was nerdy.”

During his last year of high school, Neil remembers hearing his peers describe their action-packed summers.

“All the smartest kids in my year were talking about this thing called Shad.”

Intrigued, Neil talked to his guidance counsellor and applied to the program.

And about 20 years later, he still has the creative portion of his application.

“When my wife and I were digging around my parents’ basement like a year ago, she found it and couldn’t stop laughing.”

And just like that, “The Determinator” got to experience Shad for himself (but his charges continued to rack up over the years).

“Shad was one of the first places where I felt like I had peers that were kind of like me. It wasn’t embarrassing to be a nerd.”

He met lifelong friends and was amazed that they were going to schools like Harvard, Princeton, and Yale.

“I didn’t know you could even do that and I was already going to Queen’s.  No one in my high school had the conceptual idea of taking an SAT or going to an Ivy League school…but it planted a seed in my brain that it was possible.”

After Neil completed his bachelor’s degree at Queen’s University, he was accepted into Harvard for his MBA.

“I think I went to Harvard partly because at Shad it was made possible to me. The school went from a fantastical dream to a realistic possibility…” says Neil. “I wouldn’t have been confident to apply if I didn’t know anyone that went there.”

Today, his confidence is much higher.

“The way to write a good book is to be confident about what you’re talking about, right?”

“We live in the easiest time ever, no plagues, no wars, no famines, nothing. Yet we are the least happy. And we have spiking anxiety rates, spiking depression rates, spiking loneliness rates.”

He’ll share simple lessons that anybody can do to be stronger and become more resilient.

You Are Awesome: How to Navigate Change, Wrestle with Failure, and Live an Intentional Life will be available on Nov. 5. Neil will read from his book at Shad’s alumni reception on Tuesday, Nov 12 at the RBC Foundation’s office in Toronto. This event is at-capacity.  To be added to the waitlist please contact Debbie.