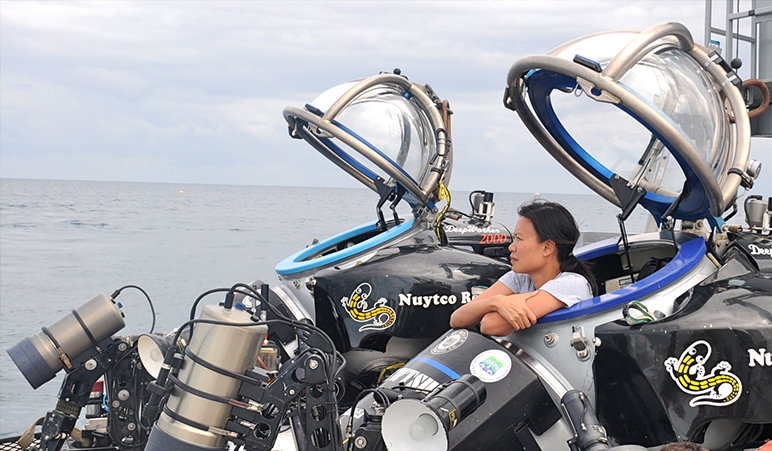 Darlene Lim has spent the past 16 years leading field investigations in deep oceans, deserts, lakes, polar regions and volcanic landscapes. Despite taking place all around the world, the projects are actually more telling about life far beyond our borders, even our planet.

Darlene Lim is a Research Scientist at the NASA Ames Research Center in California. With expertise in geobiology, space science and science operations, her work aims to help astronauts conduct scientific exploration as they return to the Moon and move onwards to Mars.

But at Shad1989, she didn’t yet have her eye on this space research at all. Instead, she was exposed to all types of sciences and ideas about how you could mobilize your passions into a career.

“My classes were rather generalized in high school,” says Darlene. “But Shad helped me realize, ‘Oh that’s why I am learning physics!’; I can take the formulas they are pushing on me in class and actually use them to build a skateboard, a rocket, or really whatever a person can think of.”

And now she’s taking science to new depths with NASA research projects like SUBSEA, which looks at how the deep ocean could provide clues on how other hydrothermal systems work—like on Enceladus, the moon of Saturn, or Europa, the moon of Jupiter.

“Under the ice layers of those two moons, we know that there are deep and vast oceans, salty oceans, which may have similar chemistry and similar life-supporting properties to our own oceans, which is really exciting.”

“But we did the entire research project with a twist,” says Darlene. “We conducted the entire field study that was focused on these science questions under simulated Mars mission conditions.”

Instead of collecting samples en masse, the team only sent two people into the field. They even delayed the communications signal between the astronauts in the field and a large group of scientists and mission operators located 20km away by 5 to 15 minutes one-way (10 and 30 minutes round-trip), replicating the inevitable delay between Mars and Earth.

And they found with the right procedures and systems, it is possible to facilitate dialogue between Earth and Mars.

“We wanted to test that and see if we could actually have meaningful, bi-directional conversation between the simulated astronaut crew and those people sitting in the Mission Support Center on Earth so the science could be enriched, so the sampling could be enriched, and so the scientists really felt that they were part of what was going on, on Mars.”

Prompted by her parents’ willingness to explore Canada after immigrating from Singapore, Darlene went on lots of camping and fishing trips in Alberta. She had a chance to explore Calgary even further at Shad.

“I think the first or the second time I ever went windsurfing was in this cold, glacial lake just outside of Banff…,” says Darlene. “I remember it was so windy and so cold. But it was so fun because we were with people whose company you enjoyed and there was no one grading you.”

But science and exploring the outdoors wasn’t her main focus growing up. She was actually determined to become a professional dancer.

“The discipline of dance, the ability to understand how to place my body, how to move on a stage, has become immeasurably helpful to me because I have to give a ton of different public presentations as a part of my job, and I feel very comfortable on a stage and in front of people.”

Even after completing her undergraduate degree in Biology, she took another turn from science and worked at an advertising firm, before completing graduate school and travelling to the Canadian High Arctic to study the effects of climate change for her PhD.

“Passion can be rerouted. I have found many passions in my life that in the end have become intertwined and connected…,” says Darlene. “And when I talk to kids who are interested in STEAM, I try to remember to share my zigzag life path, because I want them to know that there are lots of different ways to apply their passion and determination.”

It’s a message she shared a few years ago when she was invited to speak to Shads at McMaster University: You can transform your passions and skillset into any career.

“Getting hands-on experience with the rigour and demands associated with advanced STEAM topics will be invaluable to any career that you choose to undertake,” says Darlene. “What I got exposed to at Shad made a big difference to me.”