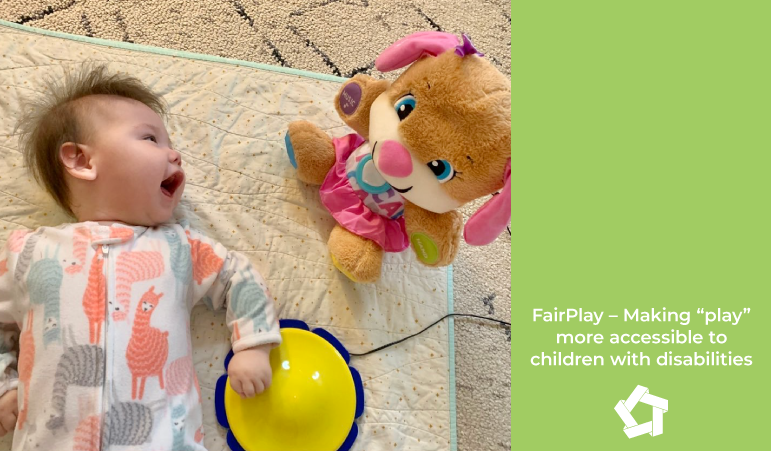 Playing with toys off the shelf is a luxury many children living with a disability are not able to experience. Most toys are developed for able-bodies, leaving little room for traditional “play” among disability communities. We caught up with Christina Grisanzio, Speech Pathologist and the founder of FairPlay to learn more about this women-led non-profit organization, developing switch-adapted toys for children with disabilities in Canada, US and Australia.

We also caught up with Stefanie Blain-Moraes, a Biomedical Engineer, a Professor in the School of Physical and Occupational Therapy, and faculty member at Shad McGill. In 2021 Stefanie partnered with FairPlay to bring a day-long adaptive toy workshop for the Shad @ McGill program. The hands-on activity brought joy, learning and true impact to the Shad community and the local disability community at large.

What is a switch adapted toy?

A switch adapted toy is a battery-operated toy that’s been modified with a large external button. The modified toy can then be operated with a touch of an elbow, foot, head, or another body part that is accessible to a child with disabilities. Adapting toys such as stuffies, bubble makers, remote control cars, fiber optic lights and marble tracks makes them more accessible to children with cerebral palsy and other physical and cognitive disabilities.

Christina fell in love with switch-adapted toys, while completing her Master of Science in Speech-Language Pathology at Vanderbilt University in Nashville, Tennessee.

“During one of my sessions with a patient with cerebral palsy in the Vanderbilt’s Bill Wilkerson Center, my supervisor pulled out a switch-adapted toy,” says Christina excitedly. Her passion for her work is very obvious and inspiring. “This child was not able to play with toys as they came off-the-shelf. The switch-adapted toy allowed her to use her elbow…I was amazed at how much it opened up her world to play!”

Seeing the difference switch-adapted toys make in a clinical setting, Christina wanted to learn more about them.

“One of the first things I learned was how expensive switch-adapted toys are – between three and five times the cost of an off-the-shelf toy. A simple toy could cost $100 US. And the toys made specifically for children with disabilities cost even more.”

“Most of the patients I saw at Vanderbilt only had access to switch-adapted toys when they came to therapy. So the only time they could ‘play’ was when they were actually doing ‘work’.”

Creating switch-adapted toys for families to use outside the clinic became the inspiration behind FairPlay.

“I and some of my peers in the program did some fundraising and learned how to adapt toys….Our first project was making a toy library for Vanderbilt’s Bill Wilkerson Center, allowing parents to check out a toy and bring it home, like they would a book in a book library. Because children’s interests change quickly, borrowing a toy instead of buying one made a lot of sense.”

FairPlay was incorporated in Tennessee in 2020. Today their volunteers are spread across the US, Canada and Australia. Organizations working with children with disabilities can submit a request on FairPlay’s website to have a custom toy library built to their specifications. There is no cost to the organizations requesting such a library and the toys are theirs to keep indefinitely. Of course if an organization is able to cover a portion of the cost that is always appreciated.

When FairPlay received their first adaptive toy library request from Canada, they reached out to Stefanie Blain-Moraes at McGill University. Her research and teachings focus on the intersection between engineering and rehabilitation, so enlisting her students to build switch-adapted toys for FairPlay was a perfect fit.

Last summer, Stefanie once again partnered with FairPlay to organize a day-long adaptive toy workshop for the Shad McGill program. At that time, the Shad program was offered online and co-ordinating a hands-on activity for 56 Shads spread across the country was not an easy task.

“Prior to the workshop, each Shad received a package with ‘My Pal Scout’ [a popular battery operated plush toy], and a kit with everything they needed to adapt this toy.” recalls Stefanie.

“To make the on-line workshop more manageable, we divided the students into two groups. Shads were literally holding up wires to their screen at home to make sure they were cutting the right one.”

To complete the adaptive toy assignment, Shads had to deliver the switch-adapted toy to a child or to an organization in their community working with children with disabilities. In this case, the geographical dispersiveness of Shads proved to be an advantage. Rather than being concentrated in one geographic area, 56 switch-adapted toys were delivered to children and to organizations across the country, in both urban and rural communities.

According to Stefanie, the ‘delivery’ of the toy proved to be an extremely meaningful part of the experience for Shads.

“The moment Shads were able to meet the child with a disability and deliver the toy, they knew they had done something that would make a very concrete difference in the life of that child. They found a lot of significance and meaning in this experience.”

Stefanie continues her partnership with FairPlay and incorporates hands-on workshops in her classes at McGill University. “Since we built the original toy library for FairPlay, my students built several adaptive toy libraries for a local children’s rehabilitation, community, and pediatric palliative centres.”

FairPlay volunteers making switch-adapted toy libraries for children in US, Canada and Australia

Back at FairPlay, Christina and her team continue building up their volunteer network. To date they have delivered 34 switch-adapted toy libraries to organizations in the US, Canada and Australia. Most FairPlay toy libraries can be found in clinical or educational settings, but a few are in community centers and one is even in a book library.

Each switch-adapted library consists of three to 10 toys selected based on specific requirements FairPlay receives from organizations working with children with disabilities. “Knowing that children have different disabilities, we think about the different ways they can access play. A child with a visual impairment may like toys with very bright lights. For children with hearing impairments, we look for toys with musical inputs. And we love finding toys with tactile inputs, ones that provide a sensation through vibration or movement – these are great for children who are deaf-blind.”

Want to get involved with FairPlay?

The cost of each adaptive library is several hundred dollars, depending on the number of toys requested, fulfilling each request depends on funds and volunteer availability.

If you are interested in getting involved, check out FairPlay’s website where you can donate, become a volunteer or attend one of their workshops.

Making an impact on the lives of others

Women like Christina and Stefanie are making a big difference in the lives of people with disabilities. Making switch-adapted toys is a step toward creating equity and inclusion for all people, regardless of their disability. These women are role models in their communities, inspiring other women to become leaders as well.