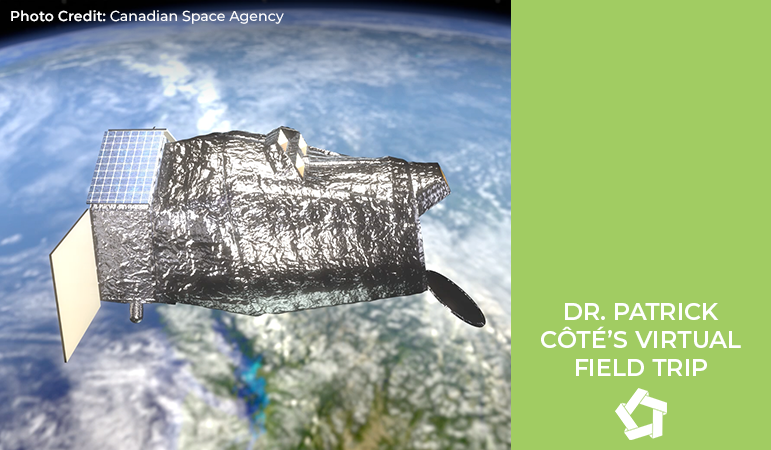 As Lead Scientist for the Cosmological Advanced Survey Telescope for Optical and ultraviolet Research (CASTOR), Dr. Patrick Côté helped design the mission and organize the science team behind the proposed Canadian space telescope.

“I remember when I was in high school seeing Canadarm,” says Patrick. “That was an amazing sight and I thought it would be great to have a new icon for Canada.”

In 2010, a long-range plan for Canada’s space contributions was developed and included the idea of developing a Canadian space telescope.

“Every ten years the community comes together, and has discussions, town halls, and writes white papers. And then we agree on the priorities for the next ten years,” says Patrick.

Telescopes like James Webb will pick up where Hubble left off, but won’t be able to fully replicate Hubble’s wide-field imaging capabilities.

“Other telescopes that are currently being planned in Europe and the United States are also operating in the infrared,” says Patrick.

CASTOR will cover the optical and ultraviolet in space, paving the way for exciting research opportunities.

“CASTOR will exceed Hubble by a factor of one hundred in discovery efficiency, and it will be made right here in Canada,” says Patrick. “If Canada proceeds with the mission, it would give us an unprecedented and strategic research opportunity.”

If the project moves forward in the approval process, they’re hoping for a launch date in 2027.

“It’s a golden age for astronomy in a number of ways. That’s not true of all scientific disciplines but it is true in astronomy. I think projects like this are important for inspiring the next generation,” says Patrick.

Ever since Shad Ben Panet’s grandparents gave him books about astronomy, he’s become part of that inspired, next-generation.

“Hubble has made all of those really neat pictures, and I think a Canadian-led space telescope would bring a sense of pride to Canada…,” says Ben. “I’m definitely going to be following this because I think this is a really promising project and I really want to see where it goes.”