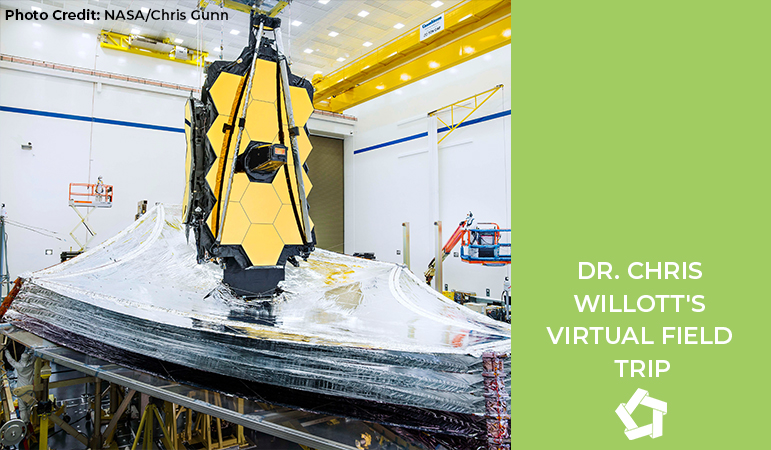 As a James Webb Space Telescope Project Scientist, Dr. Chris Willott helps with Canada’s portion of the project, ensuring that the telescope will meet astronomers and scientists’ research needs.

“This is the biggest thing that’s coming to astronomy in the 2020’s,” says Chris. “Canada’s played such a critical role in it, providing one of the science instruments and also the guiding system, which is required for every observation.”

The James Webb Space Telescope (JWST) will spark curiosity and innovation, just like its predecessor, the Hubble Space Telescope. The JWST will not only be the largest, most complex and powerful telescope ever launched into space, but it will be placed much further from Earth than Hubble was. Meaning missions to service or visit the telescope won’t be possible.

“Because it’s infrared we get to see a different set of wavelengths, which allows us to go back earlier into the history of the universe and peer into very dark and dusty clouds when stars and planets are forming,” says Chris.

Expected to launch in late-2021, the telescope will be available to astronomers from all over the world who provide proposals about what they plan to observe. Since Canada is contributing to the project—which is a collaboration between the Canadian Space Agency (CSA), National Aeronautics and Space Administration (NASA), and the European Space Agency (ESA)—the country will have guaranteed time with the telescope in its first year of operation.

“It’s a very versatile telescope. It can do lots of different types of observations…,” says Chris. “For me it’s really exciting to work on something that has huge discovery potential and will uncover surprises about the Universe we live in,” says Chris.

Canada will focus its research on distant galaxies and looking at the atmospheres of planets around other stars.

“By looking back into the early universe, we are getting a picture of what actually happened in our own galaxy as well as what happened in the rest of the Universe,” says Chris.

Shad Celine Kwan didn’t know much about the JWST before attending the virtual field trip.

“There’s this really great project that can help us know more about space, and it’s also an international effort…” says Celine. “When he talked about the instruments and how there’s a cryogenic chamber where they can put the entire telescope in and test all the instruments, I think that was really interesting.”