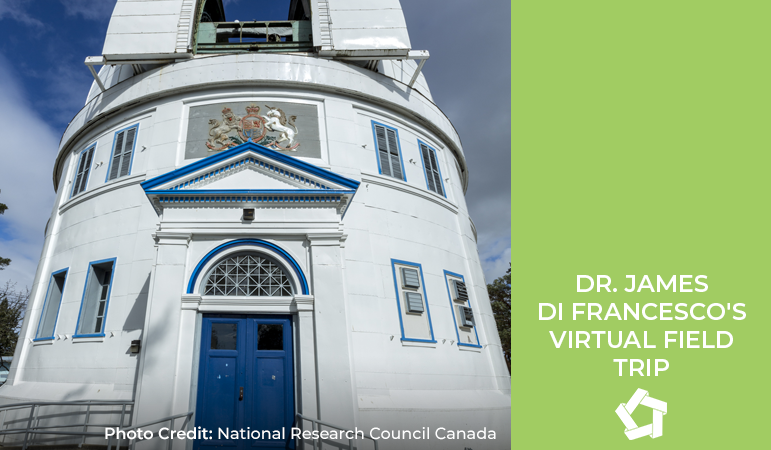 A small tour of a big Universe

As Director of the Dominion Astrophysical Observatory (DAO) in Victoria, BC, Dr. James Di Francesco not only provided an overview of how Canadian astronomers are currently looking out at the Universe with large optical and radio telescopes, but also provided insight into why astronomers look up to the sky in the first place.

“The fact that we have these incredible telescopes really lets us precisely determine what’s going on out there. And we have these cool tricks that allow us to tease out the kind of information we’re trying to learn,” says James. “It goes from astronomy to astrophysics, where we are using physics to understand the universe.”

Using telescopes to disperse light from space, astronomers can estimate how fast an object is moving towards and away from Earth, and from these data determine the mass of an object.

“With that information, we really are able to synthesize, for example, how massive is that exoplanet out there? Is it like the Earth? Is it like Jupiter? Something bigger? Something smaller? That’s why we do what we do,” says James.

There are two telescopes at the DAO, including the Plaskett telescope, which is over 100 years old. This 1.83-metre diameter telescope is named after the first Director of the observatory, John Stanley Plaskett. He was the first astronomer to ever measure the mass of the Milky Way Galaxy.

“Just over 100 years ago, Plaskett opened the telescope at DAO and put Canada on the map as a world leader in astrophysics. We hope that in 100 years we will still be at the forefront of learning about our Universe,” says James.

The observatory also serves as the headquarters of the National Research Council of Canada’s Herzberg Astronomy and Astrophysics Research Centre, which facilitates Canadian access to our international telescopes, leads cutting edge astronomy and engineering, and maintains one of the most used astronomy data centres, with archives from telescopes located in space and around the world.

Shad Matthew Gilles has been interested in astrophysics and astronomy for the past four years, diving into books, documentaries, and TV shows in his spare time to learn more. With a keen interest in studying physics in university, he enjoyed hearing about James’ astronomy background.

“I especially liked when he was talking about how he started and what he does now,” says Matthew. “Because that’s something I don’t really know much about, like the job opportunities that there are today for the work that you would be doing.”